Opening Friday, 3 September 2021, 2:00 pm, until 6 pm in accordance with the Federal Council's guidelines on Covid-19 regulations 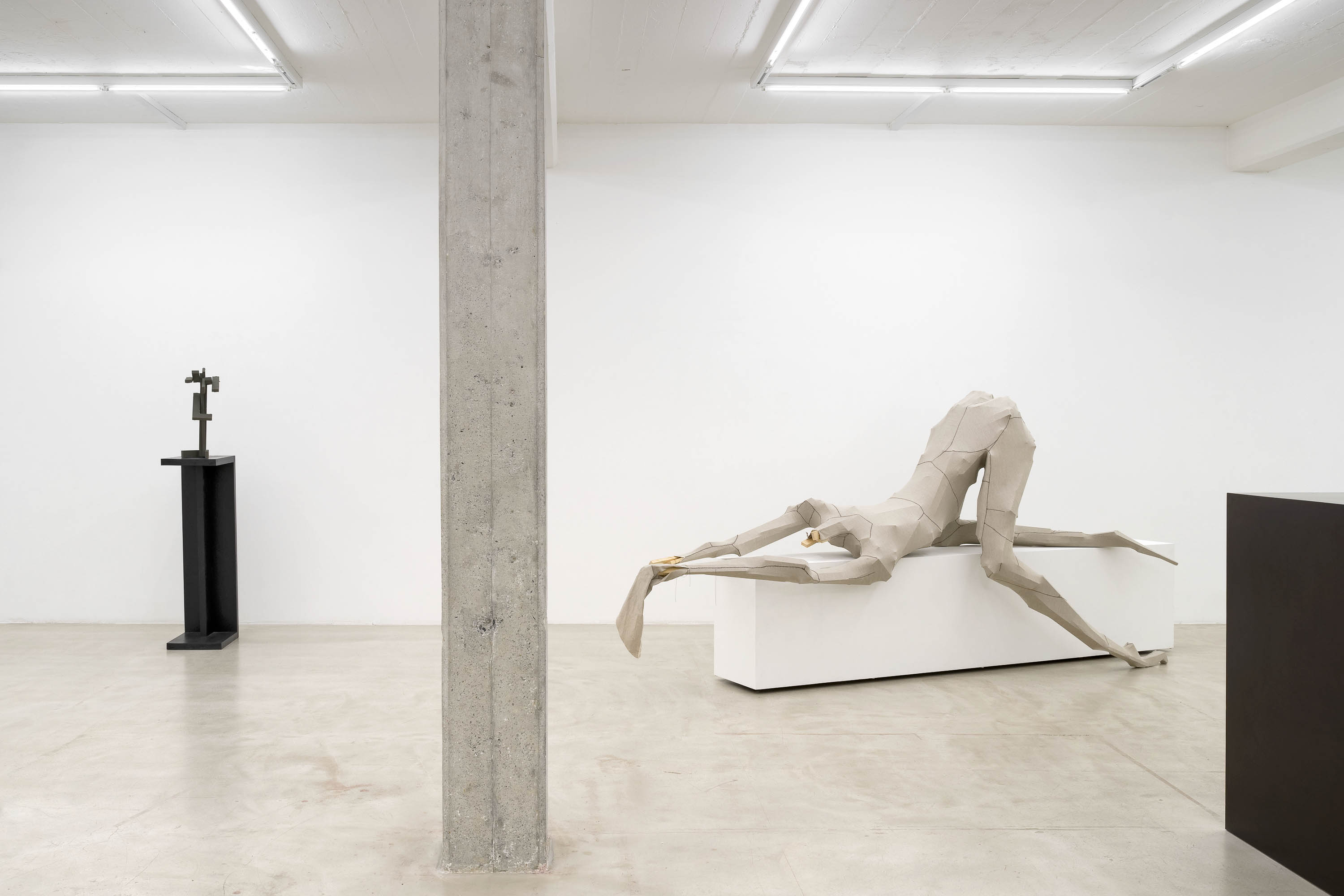 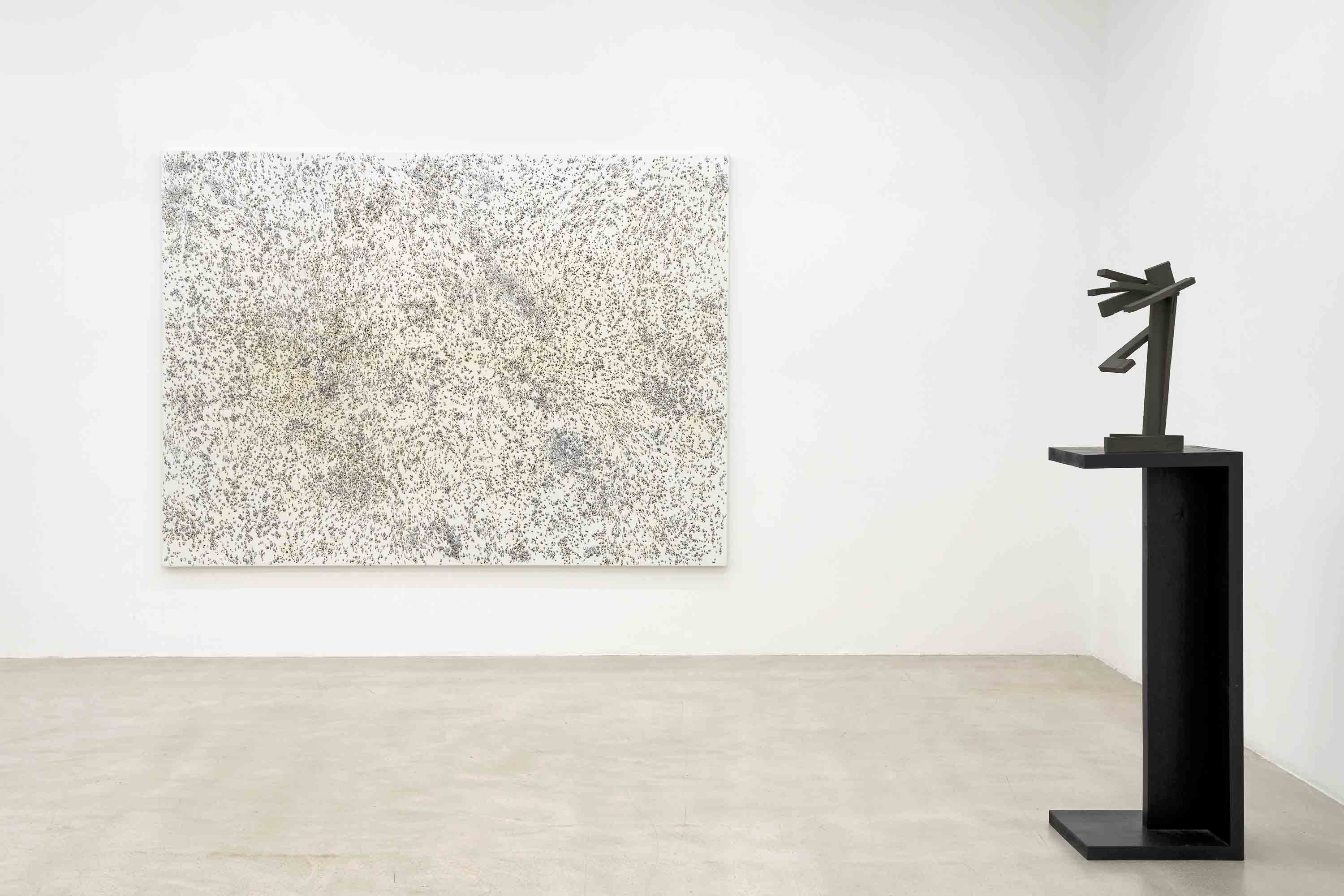 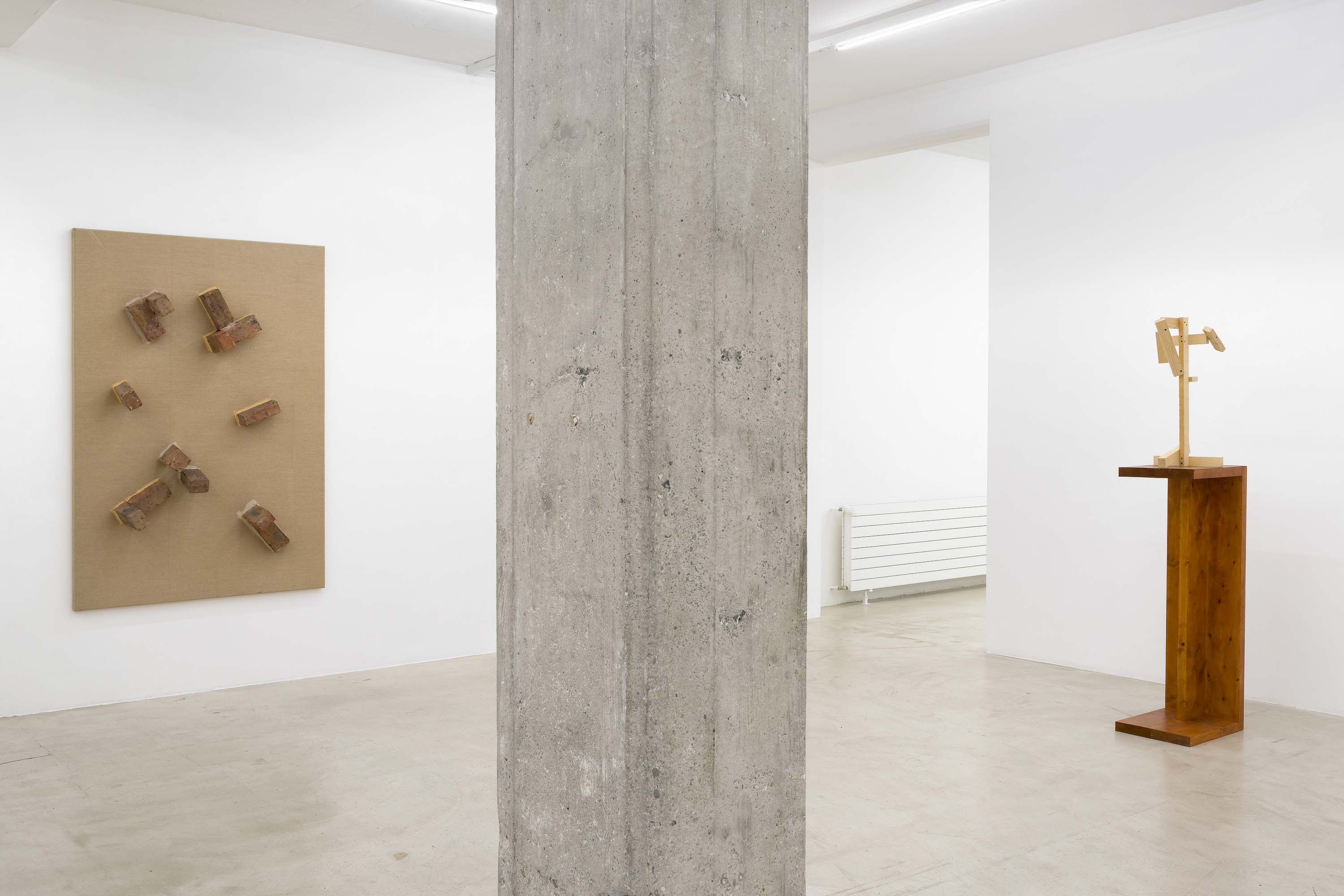 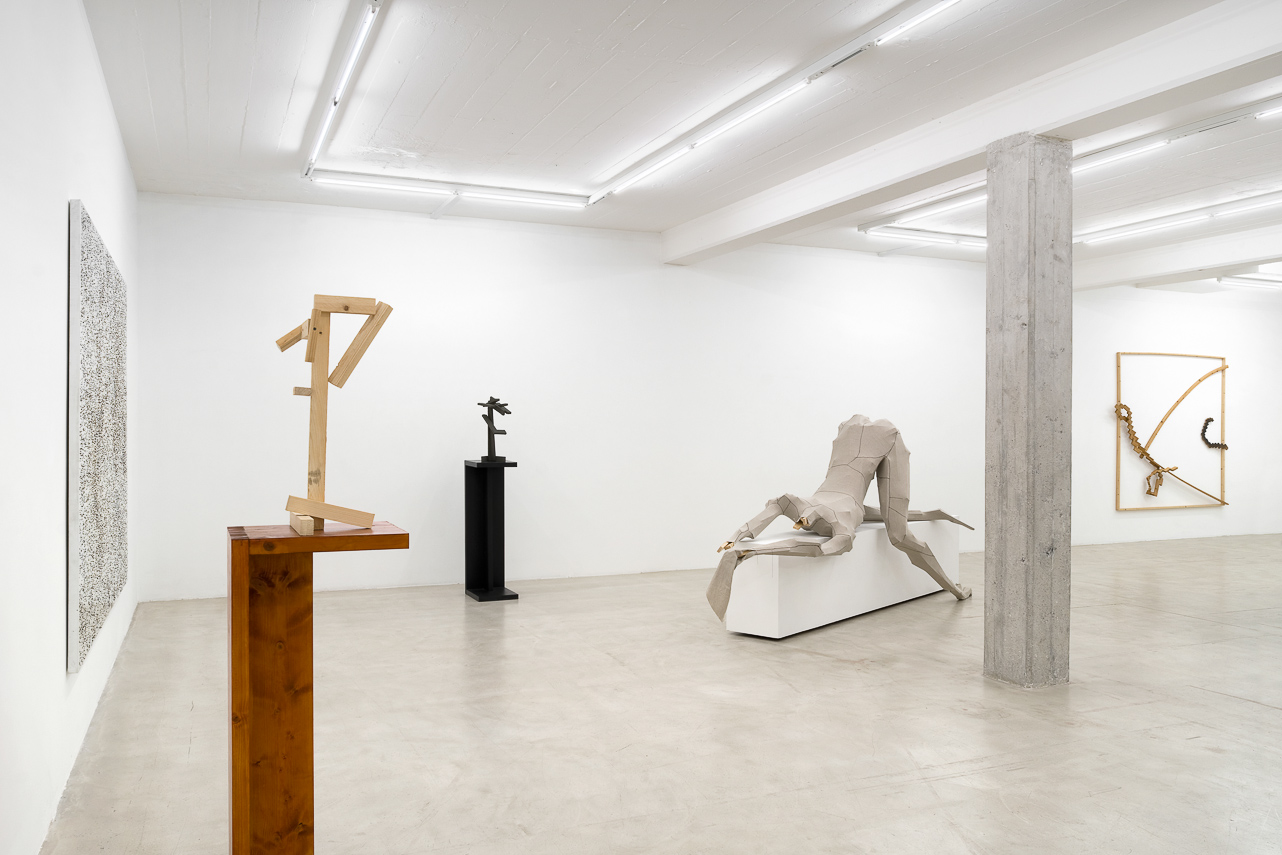 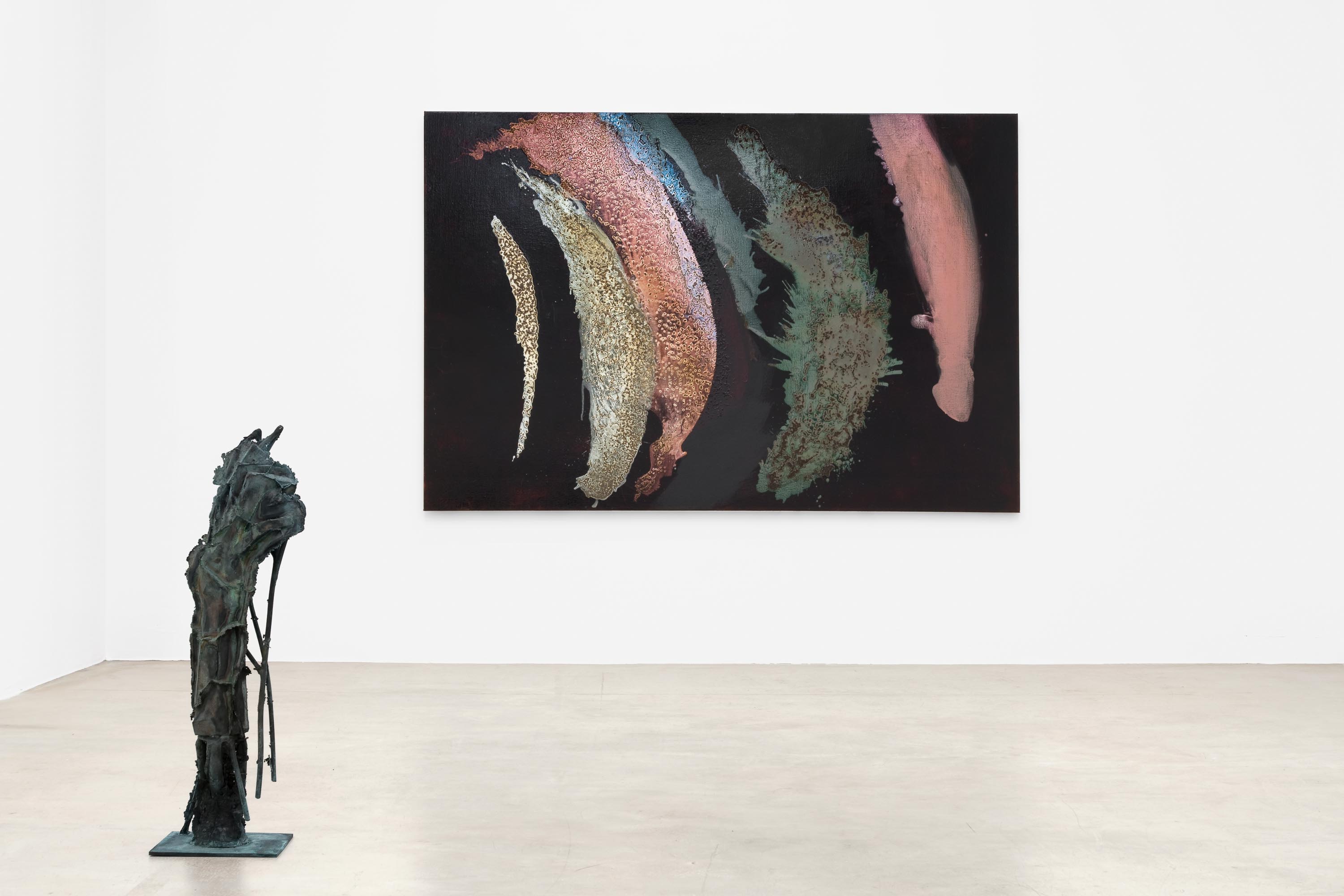 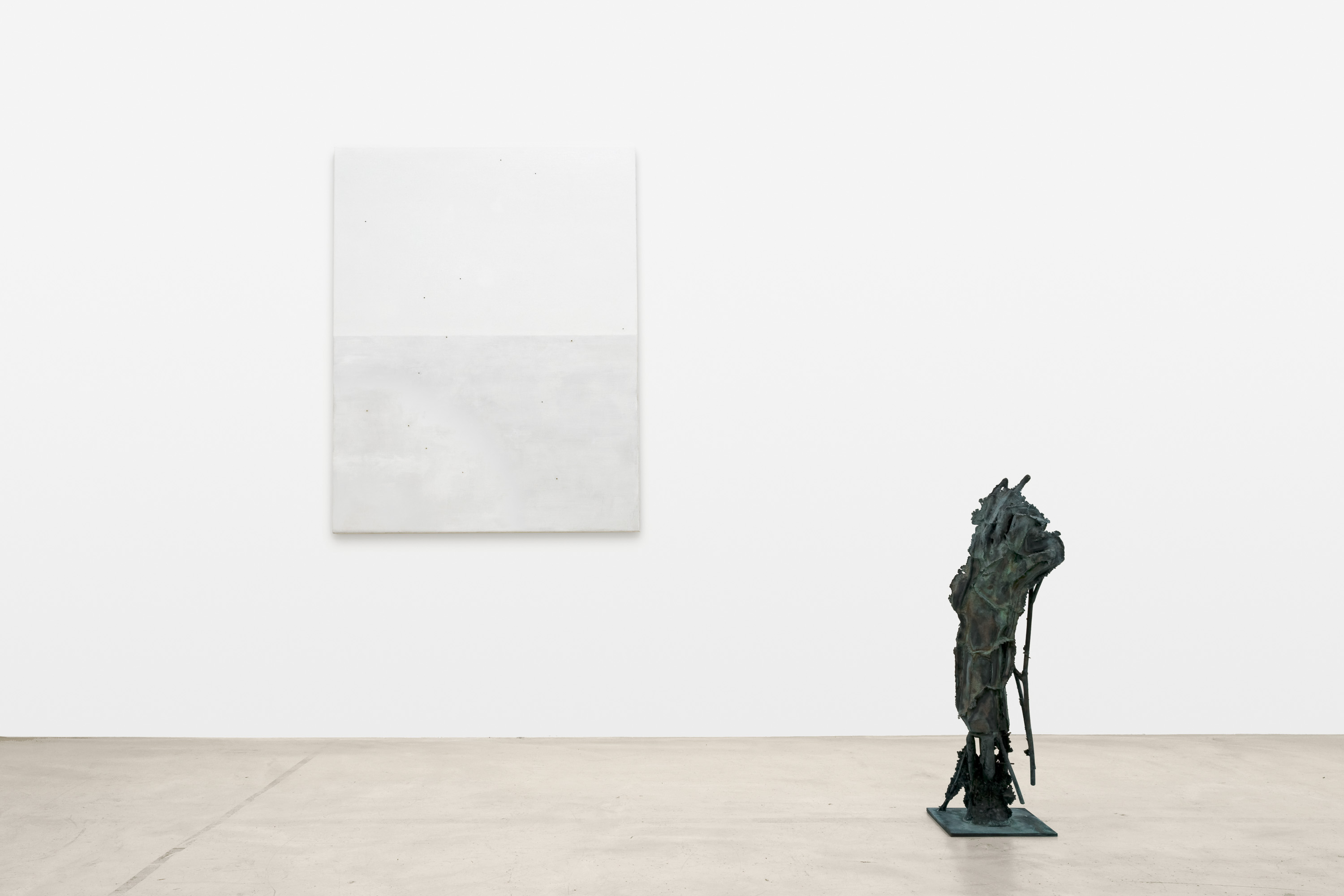 Language belongs to the material with which Georg Herold works. “All the arts require a material. It will be shown at the appropriate place with regard to poetry that its actual material is the fantasy of the listeners: this is likewise a relatively dead and raw material in a sense to be subsequently developed […].”(1) This fact together with Herold’s understandable skepticism with regard to art-historical exegesis makes it both tricky and tantalizing to write about his work. No objection can be raised here, because the risks taken on by Herold with his artifacts are likewise considerable. And inasmuch as the investigation of his linguistic material engenders an effect that can best be described with an aphorism of Karl Kraus, “The closer one looks at a word, the more distantly it looks back,” irritation is sometimes caused by the aforementioned fantasy consisting of dead material that suddenly seems to be everywhere waiting to be misunderstood. For example, when bicycling past a shop in Nippes, I read “Writing Material and Drawing Material.” Drawing material? Material fordrawing? I have to consult a dictionary in order to determine that in fact this is the correct term for material for drawing.

What Herold uses in addition to the material of words could perhaps – in modification of a frequently misunderstood term employed by Germano Celant – be designated as materiale povero (e talvolta ricco). With Arte Povera,(2) Celant was seeking to indicate less the use of economically valueless primary materials than the overcoming of traditional basic materials. There had already been a radical rejection of customary materials before the emergence of the artists who acquired a label through Celant. One notable example is Lucio Fontana, to whose Tagli – namely pictures, first created in 1958, whose canvas has been slashed – Herold repeatedly makes reference. Fontana died in 1968, but his destruction of the pictorial medium had a long-term effect about which “the wasted revolution”(3) can only dream. Thus there is Herold’s Wiedergutmachung (1988), a word that doesn’t sound good because it seems to be in the nature of things that the person who has to make compensation procrastinates for as long as possible. “Wiedergutmachung“ is by definition “the compensation for an injustice through the removal or attenuation of its consequences or through the offering of a trade-off.”(4) To clumsily sew gashes in a canvas back together doesn’t restore the original state, nor does it mitigate the effects; instead it emphasizes the “wound” and offers a reminder that stitches are customarily removed at some point after an operation. The combination of radical gesture and a term of avoidance perhaps also leads in a wider sense to a reflection upon Fontana; about the reduction of what is actually a complex oeuvre to only the slashes, as if he had not also created early environments and other works; about miscarried forms of compensation and about gestures. This can be put more radically: The bricks affixed by Herold to the canvas, by their very nature so ob-viously unsuitable for repairing rips in a canvas, are glued onto the gashes in Untitled (1988). Here the artist has no further need of accompanying or contradictory linguistic material; the simultaneous presence of canvas and bricks on Herold’s dissecting table has sufficient impact.

But this can be put more succinctly. Flagge and Säule consist of canvas and bricks. In the first case, the bricks are affixed to the canvas; in the second, the canvas is wrapped around them. Instead of leaving traces for art historians to struggle to identify and interpret, it is enough here to reflect upon symbols and forms of presentation: The issue of the pedestal arises, and all at once we have arrived at the question of multiple points of view, “Mehransichtigkeit“ – another word that suddenly looks back from quite a distance. My personal favorite in the area of reduction is the Verbogene Leinwand, which is what it says it is. But the gentle curves of the folds send art historians scurrying for Georges Didi-Huberman’s Ninfa moderna. Essai sur le drapé tombé, or at least cause them to think of the famous Veil of Veronika, upon which the true face of Christ is to be seen. When one considers that the Vatican believes itself to be in possession of this “genuine icon” and that, in a strongbox in one of the four piers of the dome of St. Peter’s, there is a cloth which, instead of showing “the veritable visage of Christ,” is “a spotted, dingy gray piece of cloth with no contour and without any trace of an image”(5) that is displayed to the faithful only one time per year, quite briefly and from a great distance, then it becomes clear that in fact, this association is not so farfetched: there is an astounding similarity between the two works.

What is so impressive in Herold’s way of proceeding is his trust in material and his self-confidence. There are many improbable “substitute materials” that not only function – for example, the magnificent Pappquarz or Tisch, the amazingly flexible piece of furniture made of pumice stones, wooden beams and roof laths in the installation Salon des dames, Salle des hommes (1994) – but also have a vivid impact upon the senses. And this is already remarkable: The viewer stands in front of roughly assembled roof laths; hanging from two extremities that can easily be read as splayed legs is a pair of black nylons – the whole thing has so physical and erotic an impact that the viewer is shocked by his own simple reception. This work as well needs no title, just as little as the suggestively contorted, lascivious roof battens women who have been staged with canvas and colored enamel since the turn of the millennium; they would offer worthy competition to each and every yogini; likewise, they are more sensual than most of those self-optimized female athletes. Whereas in connection with cosmetic surgery the formulation “sculpting the body” is used, Herold’s type of creative act has pleasingly little of the demiurgic about it. The wild abandon of the creatures corresponds quite well to the myth of black gold, to which associations are summoned up by the opulent paintings in front of which they stretch and twist their limbs. The animation of material occurs in a manner described by Henry van de Velde: “Every material possesses a characteristic that is no less essential than its practical value. This lies in its capacity for stimulating our senses. Without the mediation of the artist, without the miracle of art, this capability remains inoperative and has no effect: art and the artist awaken in material simultaneously when they imbue it with the capacity for having a stimulating effect on our senses.”(6)

The fact that illuminating sparks can fly from the most severe catastrophe that can occur with regard to the objects presented in an exhibition is demonstrated by Alles in Ordnung: The shelves in the display cabinet have tumbled down, but the objects achieve their impact for that very reason; the precisely balanced containers of water not only support the boards but extend the straight line of a horizon. This has the same calming effect as gazing out onto the ocean. Herold thereby adheres to one of the ten mottoes that Richard Diebenkorn formulated for his own artistic production: “Tolerate chaos.” At the same time, this gives rise to a quite specific form of material justice. As expressed by Goethe, the eponym for what is possibly the best-known work by Herold: “He [the artist] can therefore only in a certain sense and under specific conditions bring forth what he envisions; and the artist who will always be the most felicitous is the one whose power of invention and imagination connects in a virtually immediate manner with the material in which he works.”(7) What is good and what is difficult in Herold’s way of working is the fact that again and again he makes a new selection of material that with pleasing frequency goes against its actual purpose, for which the prince of poets in Weimar would have issued a more vehement plea. The brick may serve as an example. Classically, it is an ideal material for construction, because “in its form, its size and the manner it is affixed to its counterpart, it allows great freedom […]. Except for their color, bricks, through the way they are joined together, may be used for a representation of surfaces that is reminiscent of embroidery in diversified drawing.”(8) But the act of joining together into a fixed whole is not Herold’s intention. Nor is there any necessity to make use of the term “plastic” that is customary in reference to sculptural art and comes from the Latin word plasticus (“suitable for being formed”). There is reason, however, to give consideration to “animation of material.” What a pity that I can fail in my endeavor only through the material of language.

(2) Celant chose the term in 1967 as the title for an exhibition; the successful history of the term was just as unexpected as that of “Impressionism,” which was actually intended as an insult.

(3) Title of a book (Die verspielte Revolution, Munich, 2000) by Uwe Wesel concerning the student movement, about which the author draws a rather sobering conclusion.

(5) Paul Badde is the only non-cleric who has been allowed in recent times to view up close the Veil of Veronica, which is openly displayed only on every fifth Fasting Sunday. Cf. Paul Badde, Das Muschelseidentuch. Auf der Suche nach dem wahren Antlitz Jesu, Berlin, 2005.

Text by Kerstin Stremmel in the catalog for the exhibition by Georg Herold at the Kunstmuseum Bonn: Da wo die ... / where the ..., Snoeck Verlagsgesellschaft, 2017.